After being delivered (along with his twin sister) in a Manhattan hospital in 1958, Grahame ended up growing up a Canadian in Toronto. He received an economics degree from Queen’s University in 1981, and then became a cartoonist. He suspects it was all the doodling he did during lectures.

By 1984, Grahame was an advertising copywriter where all his best work involved his own cartoons. From Canada and The U.S. to Germany and Austria, Grahame won many awards for his cartoons in advertising. He has put pen and brush to paper for such companies as Evian, Christie Brown (for cookies), Levis and Canada Post.

He currently works full time as a cartoon illustrator. Both his editorial and gag cartoon work is syndicated and distributed around the world. Grahame now lives in Vancouver where he is also the editorial cartoonist for The Georgia Straight, a weekly newspaper. He has illustrated several books including the best seller “Wedding Toasts Made Easy”.

The Art of Fly Fishing 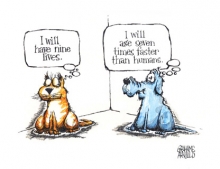 In The Dog House